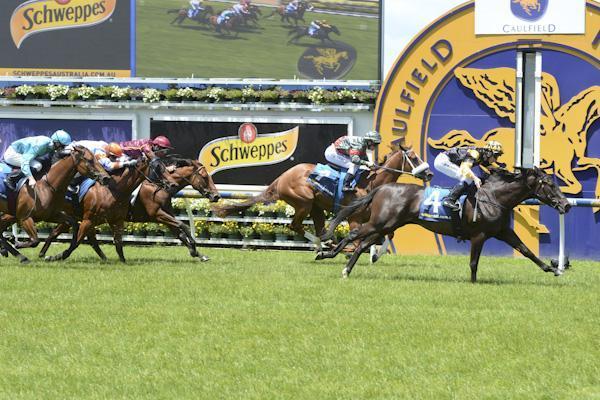 Mitchell Beer won his first city race as a trainer with Jacqui’s Joy.

The former New Zealand-trained Jacqui’s Joy ($5.50) came from last around the home turn, finishing determinedly under Patrick Moloney to wear down long time leader All In The Reflexs ($12) and score by a length.

Beer, who trains Jacqui’s Joy in partnership with Max Hinton, said winning a city race as a trainer was the fulfillment of a dream.

“I’ve been dreaming of this since I was two,” Beer said.

“She’s a beautiful filly and to get her here and on top of the ground has made all the difference.”

Three of the four races in New Zealand for Jacqui’s Joy were on heavy tracks and Beer said the daughter of Real Saga is better suited on top of the ground.

“She’s got a lovely action and is a lot more effective on better going as we saw today,” Beer said.

“She was running around in ordinary maidens but on heavy 10 and when I said to the owners we need to put some money together as I think we’ve found one in New Zealand, they didn’t hesitate.”

Beer said Jacqui’s Joy will be better over further.

“She’s a quality horse and I think she will be better as we get out over further,” Beer said.

“I was a bit worried when the pace was slow early, but she got home really well. I think once she can get to 1600 (metres) and more we will see the best of her.”