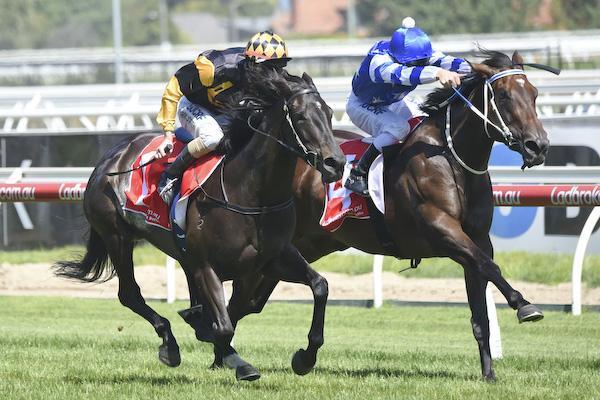 MITCHELL Beer has been around horse racing all his life, so he’s not fooled by his instant success as a trainer.

Beer, 27, joined forces with Mornington trainer Max Hinton in December and won with his first runner, Jacqui’s Joy at Kilmore.

Jacqui’s Joy returns to Caulfield on Saturday to try to continue the golden run.

“I’m really enjoying it and would like it to continue for ever but I’m not getting tricked into a false sense of security,” Beer said.

Beer, whose father Les was a prominent country jockey, has worked in stables since he was 16 and has had stints with Lloyd Williams, Russell Cameron and Jason Warren.

He said he always wanted to become a trainer and was intending to branch out on his own before a chat with Hinton saw him change path.

“He was telling me how tough it was a smaller trainer,” Beer said. “He also said he was battling to attract new owners and this is a trainer whose a very good one and has trained many good horses. He’s old school with his training and also with his client interaction. He’s a brilliant horseman and it’s such a great thing he can help me through the early stages of my career.”

Hinton has had success with the likes of Sophie’s Spirit, Grand Seattle, Lodger and Emma Princess.

“I think it’s a classical combination,” Beer said. “He’s an experienced brilliant horseman and I’m a young fellow learning the trade and can help sell the message.”

The partnership has already benefited from Beer’s astute eye as he found Jacqui’s Joy in New Zealand.

“I was in a pub watching her win with a beer in my hand and then got chatting to my friend to see whether she was available as we were looking for a tried horse to kick the partnership off and she fitted the mould,” he said.

After Saturday Jacqui’s Joy will be heading to the spelling paddock and then will return and be set for the Brisbane winter with the Queensland Oaks as her focus.

“I know if she wins Max Hinton will keep me grounded,” he said.