An Almighty win to the girl 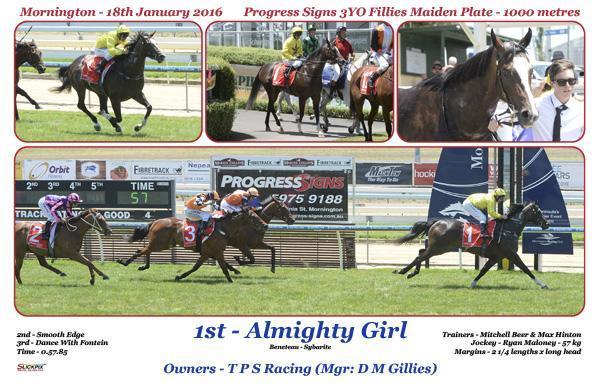 The daughter of Beneteau drew wide in gate 12 over the short course of 1000m and was immediately restrained by jockey Ryan Maloney to take cover.

The filly quickly made her move down the side when Maloney posted her three deep just prior to the corner where she quickly grabbed the leaders and drew away for an easy 2.5 length win with her ears pricked.

Almighty Girl ran 57.85 for the 1000m, running .5  of a second quicker than the Open maiden won by the smart Robbie Laing 4YO in Dezannam.

Both Beer and Hinton have always had a high opinion of the filly as she had trialed well at Mornington previously and shown above average ability in her track work.

MBH Racing were delighted with the victory and of course will now see how the filly pulls up before deciding on her next start.

Congratulations must go to Almighty Girl’s owner in David Gillies who has been a strong supporter of the stable since the get go and has numerous horses within the stable.

Almighty Girl certainly looks to have a bright future ahead of her and what a great start to 2016 for MBH Racing!