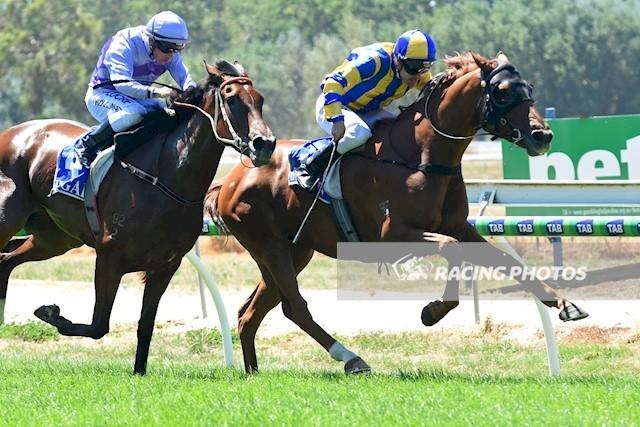 MBH Racing ticked another box at Kyneton this afternoon by training their first double under the partnership of Mitch Beer and Max Hinton.

The icing on the cake was that both horses who scored victories, Lucky Leslie and Sherpa Trail were owned by our loyal and fantastic clients in Clanbrooke Racing.

Lucky Leslie took out the opening event under the guidance of in form hoop Ryan Maloney who after 300m took the son of Stryker to the front and held off all challengers in the straight to score a gutsy and decisive win.

It looked like the short priced favourite in High Valyrian was going to go straight past Lucky but with hard riding by Maloney and the will to win by the horse it proved a strong win.

Lucky Leslie will now head to the Mornington Guineas over 1500m on Mornington Cup Day, March 25.

In the second race on the programme Sherpa Trail was far too classy for his rival and scored a good win after resuming from a spell.

Sherpa Trail has always shown above average ability as he was placed behind So Si Bon in a maiden last preparation.

Although getting a little tired on the line Sherpa Trail showed to all that he has come back in good order and will now be set for the Listed Bendigo Guineas over 1400m at Bendigo on April 1.

A big congratulations to Dean Humphries and Chris Dickinson from Clanbrooke and to both Mitch and Beer and Max Hinton for a great training effort.

That’s 15 winners for the season now!