Sky Call Off To Sydney For The County Championship Final! 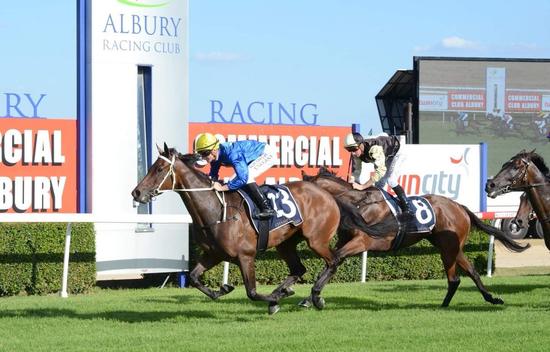 Although he had weight of numbers on his side, trainer Mitch Beer has breathed a sigh of relief with Sky Call safely into the Country Championship final.

The trainer had six runners in the Southern Districts qualifying heat at Albury on Saturday but after failing to win a race earlier on the program, was beginning to despair.

All was well that ended well with Sky Call a dominant winner over Bennelong Dancer who will head to the $500,000 final for an unprecedented third time.

"She has been set for this for so long but when she drew bad (12) it nearly killed me," Beer told Sky Thoroughbred Central.

"But I booked a good jockey and (owner) Steve Watkins sent horses to me. Without him I wouldn't be here."

Beer moved from Victoria to Albury in late 2018 and is the premier trainer in his new home.C

The runner-up, ridden by Daniel Stackhouse, is trained by Donna Scott and has finished fourth and third in two Country Championship finals.

This year's race at Randwick is on April 4.