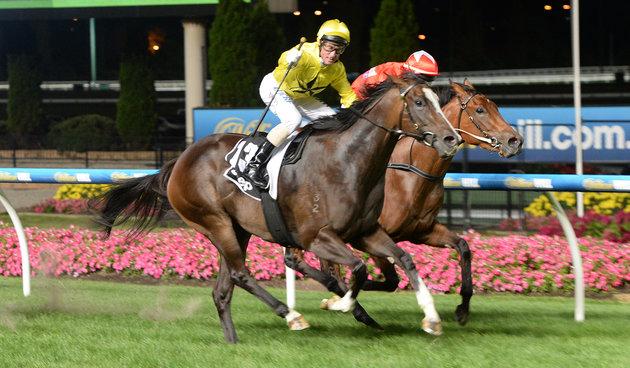 Almighty Girl is shaping up as one mighty horse, landing the Group 3 Typhoon Tracy Stakes at just her third start.

Narrowly beaten by Heatherly at Flemington last start, Almighty Girl proved that was no fluke as she downed the highly-rated Secret Agenda at Moonee Valley on Friday night.

A gun ride from Glen Boss proved the difference, overcoming the outside barrier and slotting in one-out, one-back as Secret Agenda sped to the front.

Mick Price’s filly, who was an emergency for the Oakleigh Plate, kicked clear on the turn but Almighty Girl unleashed a scintillating sprint to run over the top of the short-priced favourite and prevail.

The win was also a milestone for young trainer Mitchell Beer, his first at black-type level since joining the training ranks and partnering up with Max Hinton.

“I was cursing when we drew 15 but to Glen’s credit he didn’t even bat an eyelash – he said ‘don’t get worried, we won’t get held up’,” Beer said.

“So he was as confident as ever and she’s as good a horse as I’ve had anything to do with.

“I guess the class just prevailed – what a lovely horse.”

Beer says the stable will be cautious with the valuable filly, but they will consider interstate options if she comes through the race well.

“I’m really not keen on doing too much with her in her first prep – I really want to aim her towards the spring,” he said.

“We have to look at giving her a break and going to a race like the (Robert) Sangster or even maybe a race in Brisbane, but she’d have to come through it 100 percent.

“I’ve got no hesitations of putting her in the paddock come Monday morning.”

Boss was full of praise for both Almighty Girl and the trainer.

“There’s probably two stars – Mitch and the filly – they’re both emerging and they’re going to be very good in the future,” Boss said.